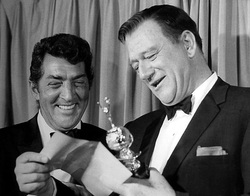 What follows are two lists. The first are all televised appearances of John Wayne that occurred during his lifetime. This list does not include every time a John Wayne film appeared on television, nor does it include television commercials for John Wayne films, unless the film promo featured something only seen on television.

The second list features every televised appearance of John Wayne after he passed away. Most of these appearances consist of archived footage of John Wayne, but some of them include friends or family members speaking about John Wayne. As with the first list, the second list does not include John Wayne films or film promos that appeared on television.

{If you would like to download this complete list of John Wayne television appearances, the file, in PDF format, is located at the bottom of this page}

[note: some of these programs featured footage only, not actual in-person appearances]

America Salutes Richard Rodgers: The Sound of His Music (8 Dec 1976)

Brannigan film promos (note: there were three special film promos for the film Brannigan that were shown on television. These three promos contained special footage shot on location specifically for promotional use, and the scenes did not appear in the actual film) (1975)

Department of the Navy Commercials (1970’s)

The Duke and Dunphy: A Heart to Heart Talk (Jerry Dunphy interviews John Wayne in a week-long series of News Spots, KCBS or KABC, Los Angeles (early to mid 1970’s)

Everything You Always Wanted To Know About Jack Benny, (but were afraid to ask) (1971)

Hollywood Without Makeup with Ken Murray (1963)

Merv Griffin Show, The on set of Green Berets (March 1968)

Musical theatrical short featuring Roy Rogers, Dale Evans & John Wayne singing around a campfire (note: this short film is listed only in one archive, and appears nowhere else. It is, therefore, as yet unconfirmed) (c.1950’s)

NBC’s Big Event, Episode featured behind the scenes of The Shootist (1976)

Screen Snapshots: Out West in Hollywood (1953)

Tell Us More “The careers of John Wayne and Joel McCrea are profiled by host Conrad Nagel.” (22 Oct 1963)

Warner Brothers Presents: Behind The Camera with host Gig Young. Show #6 Setting Up Production on The Searchers (1956)

~Television Appearances of John Wayne - Part Two~
Appearances that occurred after John Wayne's death, in which archival footage was used, or family members and/or close friends were guests and spoke about John Wayne

America Supports You with John Wayne (2009)

Hidden Hollywood: Behind the Scenes (1990)

John Wayne Made Me Cry: Our Western Heroes (TCM documentary) (2006)

Rowan and Martin’s Past Christmas Present (1993)

TCM How The West Was Won commentary by Russ Tamblyn (c.2000)

TCM The Essentials with Peter Bogdanovich: They Were Expendable (c.2000)

TCM The Essentials with Sidney Pollack: The Quiet Man (c.2000)

TCM The Man Who Shot Liberty Valance into with Joe Pantaliano (c.2000)