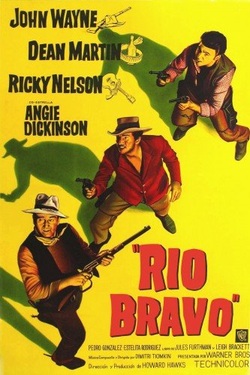 Over a career spanning half a century, John Wayne made almost 200 theatrical films and dozens of other films. As Wayne himself has noted that there were many films he worked on but could not remember, the count may well exceed 200. Sometimes he appeared on screen as the film’s star, sometimes as an extra, and sometimes he worked on these projects as a crew member. Included in this section are five lists of John Wayne film work, and these lists are as complete as I have been able to ascertain. The lists are presented in alphabetical order (rather than chronological order), with the year of release following after the name of the film, and other information as well, when necessary.

In the “Theatrical Films” list, alternate titles are also given beneath each film title. In recent years there have been edited down versions of some early John Wayne films, some colorized and others not, that have been re-titled. This has given rise to the mistaken idea that these are previously unknown or unreleased John Wayne films, when the fact of the matter is, they are merely edited and or colorized versions of his films.

The Lists Included in This Section Are:
List #1) The Theatrical Films of John Wayne
List #2) Films with John Wayne as a part of the story line
List #3) Governmental & Industrial films, Theatrical Shorts, Political films, Public Service Announcements (PSA’s) shown in theaters, and a couple of pieces I’ve labeled “other video” that I am not really sure where to put.
List #4) Theatrical newsreels featuring John Wayne.
List #5) “Making of” Featurettes. Although these were primarily shown in theaters, some of those listed here were made specifically for the video release of the particular films.

{If you would like to download this complete filmography of John Wayne, the file, in PDF format, is located at the bottom of this page}

Adventure's End - 1937 [No prints of this film are known to exist. Considered to be a lost film -- UPDATE: Prints of this film have been discovered in the Library of Congress. Efforts are currently underway to have this film released.]

The Alamo – 1960 [Note: There are at least two versions of this film that have been released on video/DVD. They are the 167 min. General Release version, and the 193 min. Road Show version]

Cheer Up And Smile – 1930 [No prints of this film are known to exist. Considered to be a lost film]

The Deceiver – 1931 [No prints of this film are known to exist. Considered to be a lost film]

Desert Command – 1946 [Note: This is a 75 minute edited “Feature Film Version” of the 1933 film serial The Three Musketeers]

The Forward Pass – 1929 [No prints of this film are known to exist. Considered to be a lost film]

Lawless Frontier – 1934 [aka: Vengeance is Mine (edited, colorized version)]

Lone Star Ranger – 1930 [Note: John Wayne stated that he worked on this film, herding horses, and as an un-credited posse member]

The Man From Utah – 1934 [aka: Rodeo Racketeers (edited, colorized version)]

The Oregon Trail – 1936 [No prints of this film are known to exist. Considered to be a lost film. --UPDATE: There are unsubstantiated rumors circulating that a print of this film has been discovered. As yet, these rumors have not been definitively substantiated.]

Seeing Stars -1927 [A recently discovered still from this film definitively shows a very young John Wayne, on screen, as an uncredited extra]

The Shamrock Handicap - 1926 [A recently discovered still from this film definitively shows a very young John Wayne, on screen, as an uncredited extra]

Speakeasy  - 1929 [No prints of this film are known to exist. Considered to be a lost film]

Strong Boy – 1929 [No prints of this film are known to exist. Considered to be a lost film]

The Sweetheart of Sigma Chi – 1933 [No prints of this film are known to exist. Considered to be a lost film. -- UPDATE: A very poor quality print of this film has been found, and is available on You Tube -- Although there are some who dispute John Wayne’s appearance in this film, there is a publicity still from this film which does feature John Wayne in it. The fact that the film featured the USC fraternity Sigma Chi, which Wayne was a member of, further validates his more than likely appearance in the film]

That’s My Boy – 1932 [No prints of this film are known to exist. Considered to be a lost film]

Words and Music – 1929 [No prints of this film are known to exist. Considered to be a lost film]

~Films with John Wayne as Part of the Story Line~

Down Mexico Way – 1941, starring: Gene Autry. Although John Wayne does not appear, he is part of the story line.

Meanwhile, Back at the Ranch – 1997, Compilation Film. John Wayne appears in archive footage.

100 Years Young: The Story of the Massachusetts State Police – Year Unknown, Industrial Film [Allegedly narrated by John Wayne, this is an as yet unconfirmed appearance]

The Challenge of Ideas – 1961, Political Film [John Wayne appears on camera speaking out against communism]

The Ducks Unlimited Story – c.1970’s, Industrial Film [John Wayne appears on camera and narrates a segment of this documentary. Interestingly, I have been told recently by Ducks Unlimited that this documentary does not exist, and has never existed. However, in 2001, I did watch this video on the Ducks Unlimited website. I also contacted Ducks Unlimited in 2001 to inquire about purchasing a copy of the film, and I was told that although it was available, supplies were limited to copies currently in stock, and no new copies would be made.]

The Friendship Train – c.1947, Theatrical Short [Wayne can allegedly be seen near the beginning of this short film, during the Hollywood sequence, but try as I might, I have yet to see him in it. This is an as yet unconfirmed appearance]

The Heart of Show Business - 1957, Theatrical Short [Wayne is featured as one of the off-camera narrators in this 40 minute Variety Clubs International short film.]

The Hollywood Handicap – 1932, Theatrical Short [This 20 minute theatrical short featured up and coming actors, including John Wayne, in comedy and musical skits]

Home For The Seabees – 1977, U.S. Navy Informational Film [Narrated by John Wayne, this short informational film is shown at the SeaBee Museum in Port Hueneme, California. Although the museum has stated in the past that they plan to make this film available for purchase, they have yet to do so.]

John Ford: Memorial Day 1970 – 1974, Other Video [Filmed by Mark Haggard, and released in 1974. This video was filmed at the Motion Picture and Television Country House and Hospital. This short film may contain footage of John Wayne, as he regularly attended these annual functions, and entertained the residents there.]

Meet the Stars #8: Stars Past and Present – 1941, Theatrical Short [Film stars, including John Wayne, gather to take part in the ceremonies at the dedication of Republic's new sound stage to the memory of Mabel Normand]

Memo For Joe – 1944, Theatrical PSA [Film stars, including John Wayne, go on camera to promote the American Community Chest program and its importance to the war effort.]

NROTC, UCLA Graduation Ceremonies, June 7, 1970 – 1970, Department of Defense Film [John Wayne participates in the graduation ceremonies, speaking and pinning the NROTC Pistol Award on one of the cadets.]

Operation Hawthorne – 1966, U.S. Army film [Documents the activities of the 101st Airborne Division, in Dak To South Vietnam. John Wayne makes an appearance and visits the 502d and 327 Infantry.]

Operation Homecoming – 1973, Military / Political Film [Between April 27-29, 1973, returning prisoners of war were honored at a special event by the President and several dignitaries and celebrities. John Wayne gives a speech, and is seen throughout the video. Although this was never meant to be aired, video of the event does exist in some collections.]

Patriotism: Have it Your Way – 1978, Government Information Film [John Wayne narrates and appears on camera, extolling the virtues of patriotism. This is the last known on-screen film appearance made by John Wayne.]

Three Lives – 1953, Film Short / PSA [Along with several other Hollywood stars, John Wayne serves as a commentator in this brief PSA.]

The Victory Squad - c.1966, Political Film, this film was produced by the Los Angeles County Republican Central Committee, and is hosted by John Wayne.

The Way It Is: The Tactical Airlift Story – 1972, United States Air Force Film [John Wayne does an on-camera introduction and then narrates this USAF/DoD information film.]

Wings of Eagles Home Movies – c.1956/1957, Other Video [This is an 8mm home movie taken aboard the U.S. Navy ship used during the filming of Wings of Eagles starring John Wayne. The film does not have any sound, but John Wayne does appear in a number of candid shots. Please note that the original of this film was purchased by Ethan Wayne, who now holds the rights to it. It is not available for sale.]

You’re The Star – 1953, Theatrical PSA [John Wayne appears on camera, presumably on the set of Trouble Along the Way, and promotes the benefits of giving to the Red Cross.]

Universal Newsreel – 1967: Acapulco Party (Lynda Bird Johnson and actor-boyfriend George Hamilton are among the guests at a festive dinner party in Acapulco. They refuse comment on speculation about any future wedding. Other celebrities present include John Wayne, Dolores del Rio, and Merle Oberon.)

Unknown Newsreel Footage – c.1960: World Premiere of The Alamo at the Lawn Theater in Texas.

Brannigan: John Wayne in London – The Making of Brannigan (1975)

The Making of McLintock! (with Michael Wayne & Andrew McLaglen)  (2006)

Movie Makers, The Making of The Green Beret (1968)

The Making of The Quiet Man, with host Leonard Maltin (1992)